Structural perfection of the porphyrin ring does not prevent synthetic chemists from introducing various modifications to the macrocycle. A large number of structures can be formally derived from porphyrin by changing the number or sequence of pyrrolic rings and methine bridges. Three different classes of compounds are usually distinguished.

Porphyrin isomers, typified by Vogel's porphycene, differ from the regular porphyrin only in the order of pyrrolic units and meso bridges. All of such isomers contain direct pyrrole-pyrrole linkages and possess a distorted coordination core.

Contracted porphyrins contain less elements than the original molecule. The most important example is corrole, Smaller dimensions of the coordination core in conjunction with its higher formal charge enable stabilization of high oxidation states in metal complexes of corroles.

Expanded porphyrins, such as pentaphyrin or sapphyrin contain additional pyrrole rings, methine bridges, or both. The large macrocyclic core is usually less effective in coordinating metal ions but some of the expanded species have been found to bind anions instead. The largest expanded porphyrins contain as many as 24 pyrrolic rings. 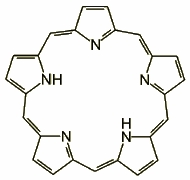 Core-modified porphyrins constitute a fairly inhomogeneous group of macrocycles. In all of those molecules the coordination core does not contain four nitrogens, as in the case of regular porphyrin, but a new set of donors, which may include e.g. oxygen, sulfur, or a CH bond. To rebuild the coordination core the molecule can be modified in several ways, some of which are shown below.

Heteroatom substitution: one or more of the nitrogens is replaced by a different heteroatom. The elements introduced to date are O, S, Se, and Te. An interesting and rather unusual example is provided by ditelluraporphyrin. 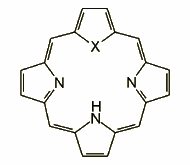 Confusion: an α,β-linked pyrrole may be introduced to the structure "accidentally", as in the case of N-confused (inverted) tetraarylporphyrin, or in a programmed synthesis.

Pyrrole replacement: m-benziporphyrin, in which m-phenylene fills the place of a pyrrole, was synthesized by Breitmaier's group in 1994, as the first molecule of this type. Many other moieties have been introduced since then: cyclopentadiene, cycloheptatriene, indene, azulene, etc. p-Benziporphyrin also belongs to the family. 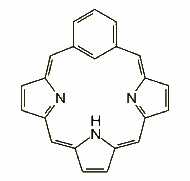 Many porphyrin analogues contain more than one modification. For instance numerous expanded heteroporphyrins have been synthesized, amongst them the figure-eight tetrathiaoctaphyrin.